Rain the Colour Blue with a Little Red in it

Purple Rain, the cult film that tells the story of Prince’s own journey to stardom, has been translated to the Niger desert in this film featuring the nomadic group of people known as the Tuareg. Rain the Colour Blue with a Little Red in It (so translated because there is no word for “purple” in the language spoken by the Tuareg people) is an original remake by ‘guerilla ethnomusicologist’ Christopher Kirkley. The film tells the story of a guitarist and songwriter who battles his musical rivals, a conservative father and his own ego to create a vibrant new music scene in Niger. Shot on a shoestring budget over a space of only ten days, and one of the first feature films to be shot entirely in the Tuareg language, this is an exciting film celebrating new musical traditions coming out of the Sahara desert. 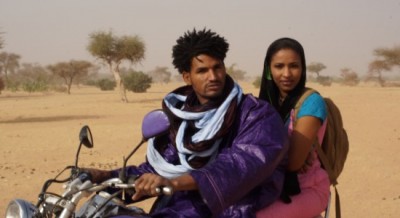